The CCPA was a groundbreaking development for privacy laws in the United States. It aimed to mirror legislation in Europe like the GDPR that protects the privacy and security of residents in the state.

Many other states are following suit, and we expect more than 15 others to consider similar laws this year. This guide will dive into the details of the bills the states are reviewing and what to expect into 2022. 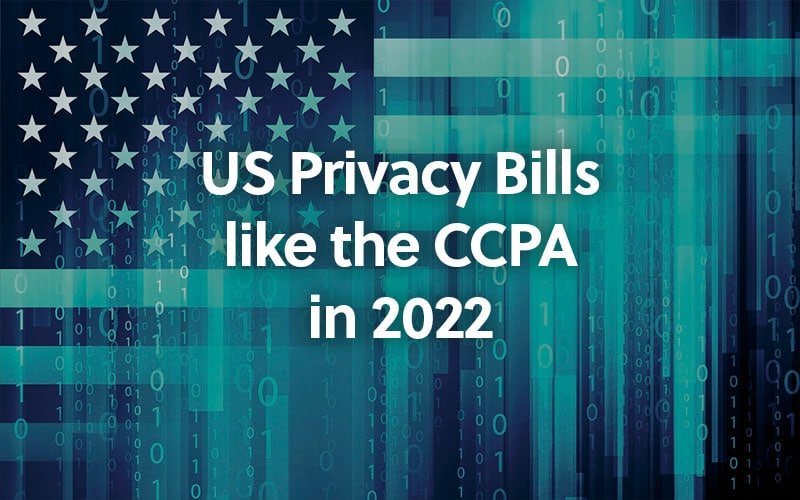 Before we review what various states are working on in the legislative term in 2022, it helps to understand the current legal environment. As more data privacy laws emerge, these discussions will continue to be at the forefront of legislators’ agendas.

For example, 27 different states introduced privacy bills in 2021. Some of these laws have not yet been approved or finalized – so the discussions will continue next year. At least 17 different states are considering implementing laws like the CCPA. Here is an overview of what is happening in each of the states:

The representative intends to file at least one privacy bill in 2022, so we are sure to see additional developments in Arizona.

Last year, lawmakers in Connecticut reviewed SB 893 – but it ultimately did not pass.

The senator that sponsored it, James Maroney, is now working to prepare another bill relating to privacy for 2022. He created a privacy working group that meets monthly to discuss topics like exceptions, rulemaking authority, and other provisions.

Likewise, the group worked with individuals like the Senator that wrote the Colorado Privacy Act. Their goal is to gather as much information and support before the legislature opens in early February 2022.

Florida is another state working to pass privacy legislation since last year. They were very close to approving the bill, but unfortunately, they did not reach an agreement before the session ended.

The discussions will likely continue into 2022, even though another privacy bill has not yet been filed.

Senator Susan Lee pre-filed SB 11 ahead of the opening of the Maryland legislature. The Maryland Online Consumer Protection and Child Safety Act seeks to regulate how data is collected and used.

It would also establish consumer rights regarding their data online, such as the right to receive notice, delete data, and prevent disclosure.

The Massachusetts Information Privacy Act mirrors the proposals made in Washington. Unlike other states, the legislature in Massachusetts is open year-round, so these discussions are ongoing.

The Joint Committee on Advanced Information Technology, the Internet, and Cybersecurity held a hearing about the bill at the end of 2021, but no additional meetings are scheduled at this point.

The Minnesota Consumer Data Privacy Act, HF 1492, was also considered last year. The proposal was almost identical to the one introduced in Washington, and the initial announcement was made in an informational hearing.

The bill was built with privacy by design and would introduce additional rights to consumers. For example, it includes a global opt-out, ability to cure, private right of action, and more.

We expect the Mississippi Consumer Data Privacy Act to be reintroduced for the 2022 legislative session.

When the New York Privacy Act was presented in 2021, it was quickly voted out by the Senate Consumer Protection Committee. It was referred to the Rules Committee and will be revisited during the 2022 session.

North Carolina’s Consumer Privacy Act has also remained idle since 2021. It is currently in the Committee on Rules and Operations of the Senate and will carry over to 2022.

Although the state announced the Ohio Personal Privacy Act in the summer of 2021, the committee has yet to finalize its vote on it. More consideration is needed, so they are holding the vote until sometime in 2022.

The Oklahoma Computer Data Privacy Act was passed in the House, but it has yet to move through the senate. HB 1602 is awaiting a Senate Judiciary Committee hearing in 2022. If it passes it will move back to the House where it is expected to pass easily.

HB 1126 was introduced in 2021, but it sat idle in the Consumer Affairs Committee. As such, discussions will begin again when the legislature reconvenes on April 1, 2022.

While lawmakers in Utah considered privacy bill SB 200 in 2021, it is unclear as to whether they will continue that in 2022.

South Carolina will revisit H3063 which was introduced last year. The South Carolina Biometric Data Privacy Act will give consumers rights over their personal information and prevent them from being discriminated against if they opt-out of data collection.

In 2021, bill H160 was sponsored by Representative Maida Townsend. This discussion will continue into 2022 and will address issues relating to privacy and data collection.

The Washington Privacy Act has been a topic of discussion in the state for several years, and in 2021 the People’s Privacy Act was also introduced. The latter is currently undergoing amendment to prepare for the new session in 2022.

The LGPD in Brazil served as the model, and it includes the right to refuse and revoke consent. Although earlier bills did not get enough votes to move from the House, lawmakers hope this more robust proposal will succeed.

What About the Other States?

Although many states are considering CCPA-like consumer privacy bills, not all of them have reached that point yet.

For example, the legislators in these states only meet on alternating years, so there will not be any discussions in 2022:

However, privacy laws will continue to be a priority – especially as more states pass their bills. That means you should expect these states to consider something similar in 2023 and beyond.